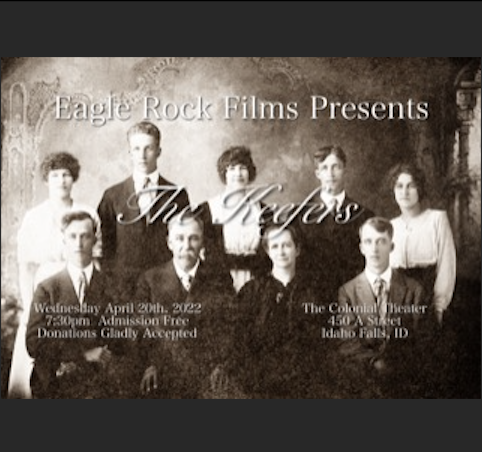 “Newcomers to Idaho Falls are often captivated by its namesake falls on the Snake River. They also may learn of the small, historic cabin located on an island half a mile upstream known as Keefer’s Island. What they don’t always hear about is the rich history that connects these two locations. It’s the story of a pioneer family.”

Thus, begins The Keefers, a one-hour documentary from Eagle Rock Films that will be shown Wednesday, April 20th at 7:30pm at The Colonial Theater in Idaho Falls. Admission is free. Donations are accepted.

Beginning in 1875, the film chronicles the westward journey of 23-year old William W. Keefer from his ancestral home in Pennsylvania to a new life in the railroad boomtown of Eagle Rock, Idaho Territory. The sprawling saga encompasses a transcontinental love story, a tumultuous railroad strike and violent windstorm, cowboys shooting up the town and native tribes facing starvation. But at the heart of the film are the exploits of William Keefer’s eccentric, notorious sons--twins, Fred and Frank.

Producer/director of the film, Bill McMillin, from Seattle, WA, grew up in Idaho Falls. He has spent the last forty plus years as a news and documentary cameraman, traveling the nation and the globe in search of a good story. This one brought him home.

The Keefers is a presentation of an independent promoter.

The Idaho Falls Arts Council Board of Director's current statement regarding COVID protocol is: Masks are strongly encouraged when social distance cannot be maintained.